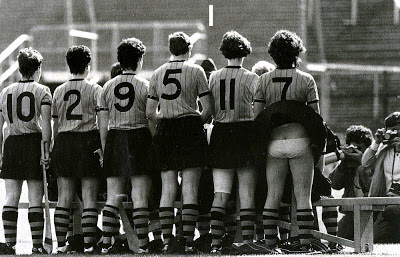 Once you get over the obvious, find the sticks the women above use to play Camogie, the womens' variation of mens' Hurling. I am informed that most camogie players also play field hockey,  who knew?  Camogie sticks, known as camogs, are more or less the length of field hockey sticks, with a wide flat head,not quite so large as used to pull pizza out of an oven.

My Irish cousins play these free wheeling sports, hurling and camogie, and there is good cause to wear helmets. Though relatively rare the sport is romantically seen as a cross between a drunken brawl and a riot.  In fact, it is another lively variation of ORIGINAL HOCKEY, safe enough to wear no shin pads  or gloves. The introduction of helmets

is a modern innovation.  This is not such a bad idea, as unlike most other versions of hockey, Hurling does not discourage high sticks.  Hurling is a thrilling variation of hockey, filled to overflowing with energy.

Invented in Ireland, MADE IN AMERICA.  Hurling has a healthy following in the United States.  As  suggested in previous posts, field hockey players and hurling players would find the other sport quite familiar.  There is a special quality that gives field hockey and hurling a special flavor.  Those curious to have a taste might be surprised  by the number of active Hurling Clubs in the USA.

Let's imagine you already know how to play, but live where no club exists.
Here is a model of how to create a club.
(It is a valid model for starting a field hockey club at the same time).

Check out the latest at Dita Field Hockey North America, where true passion and GENIUS abound!