Even without those goggles that cause more injuries than they prevent, field hockey is safer than these eight Sports:

Read the article.  Field Hockey is a safer sport than many.

Posted by Sandy Kinnee at 6:39 PM No comments: 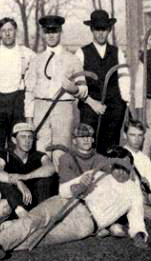 Few know that at the beginning of the twentieth century intercollegiate football was nearly prohibited by President Teddy Roosevelt.

Northern Iowa University tells its own story of men playing field hockey during that time.

"Beginning with the 1903 fall term, instead of participating in one hour of military drill three times a week, the men were required to participate in some sort of physical activity four times a week for forty-five minutes.  They could choose among basketball, tennis, football, field hockey, track, cross country, and golf.  Basketball and tennis were the men's most popular choices, but football, track, and field hockey were close behind.  The other two sports attracted few students.  The student newspaper speculated that compulsory athletics for men would help to build stronger intercollegiate teams at the Normal School".

Read The Story of an American University's Long, yet almost forgotten,saga of field hockey for Both men and women. 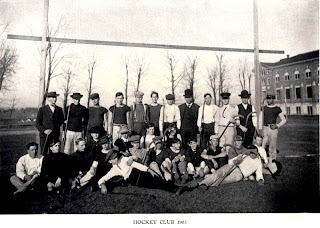 at Dita Field Hockey North America, where true passion and GENIUS abound!
Posted by Sandy Kinnee at 5:19 AM No comments:

Hockey: A Family Tradition of Excellence 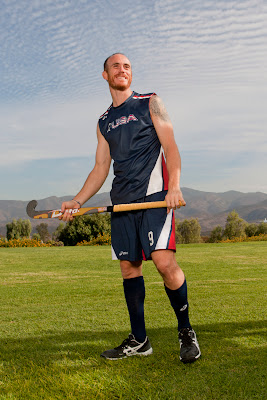 For Ian Scally, field hockey is an heirloom passed down from generation to generation. His father and grandfather played in the Olympic Games and his aunt competed in several World Cups. At every level of play, Scally remains true to the core reason he and his family played and still play field hockey – because they simply enjoy it.

Posted by Sandy Kinnee at 8:00 AM No comments:

Left Hand at Top of Stick 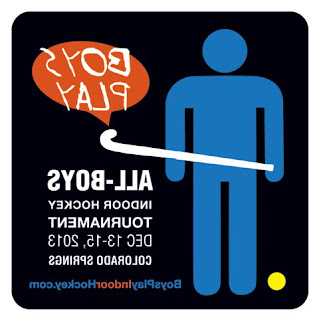 For the benefit of the purists who know that the left hand is at the top of the stick,
here is Stick Boy not looking in the mirror at himself.

Sponsored by Dita
Posted by Sandy Kinnee at 6:34 AM No comments:

As long as one lives in the USA, and not anywhere else in the entire world, one sees that there is only one sport exclusive to women:  field hockey.

Once upon a time other sports were the exclusive domain of men.  Along came Title Nine and the world changed.  Or, rather we thought it changed.

This morning I came across an old blog from a woman who has coached ice hockey questioning what gives a man the right to coach women's field hockey.  Well, the same right she has, perhaps?

Men have been playing field hockey in the USA since the tail end of the nineteenth century, more invisibly as not.  This lack of visibility and lack of scholastic teams for guys have helped support the myth that field hockey is territory exclusive to females.  At some bygone time ice hockey was known as Boys hockey and field hockey was called Girls hockey.
Pink and blue sports are an antiquated notion.

Field hockey does need both men and women, as players, as coaches, as umpires, as promoters, as everything else.  Take a good look at the most successful NCAA Division I field hockey programs and you will notice the diversity of the coaching and support staffs.
Strong programs are built with the strongest building blocks: diverse individuals with special knowledge, skills, and talents.

Men with international field hockey experience have played a role in the success of those teams who are prominent in NCAA Division I.  It is a smart use of talents and diversity, not a gender issue.  The top programs in the USA hire their coaches from the ranks of women who have competed on an elite, international level.

Steve Jennings, shown above, happens to coach at American University.
Marcia Pankratz, to the left, is head coach at Michigan. Both were members of USA National teams with considerable international experience.


Ask either coach if they coach alone.

This is genius level hockey.

Posted by Sandy Kinnee at 8:35 AM No comments: