Get Your Genius On 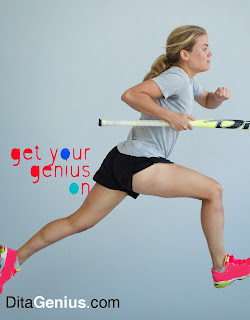 There are but a few companies
in the entire world which focus solely
upon the sport of field hockey.

The rest think they can copy our sticks
and sell them as a sideline
to their real business of: lacrosse,
small appliances, shoes, make-up,
or whatever.  To those merchants,
field hockey sticks is a sideline.

For Dita, Grays, TK, and Gryphon,
it's a passion.
Play smart.
Get your genius on!

Posted by Sandy Kinnee at 5:17 AM No comments: 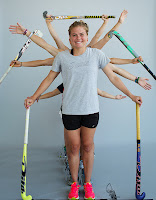 Kat Sharkey and her USA Teammates*, standing behind her, show off their Dita sticks.

Whether you prefer to get your stick from your local, authorized Dita retailer, or online, the new full range of Dita EXA, Terra, and Giga sticks are now available.

Remember to check with your authorized retailer about which models they stock.

Posted by Sandy Kinnee at 1:54 PM No comments: I really don't want to beat a dead horse. But I do wish it would die, by being withdrawn. The high school use of so-called safety goggles is unlikely to be reversed.  There are those who see additional equipment as enhancing the game.  Yes, it enhances the profitability of the game for those seeking to sell goggles, by millions of dollars.  It creates an illusion that it makes a player safer.

There is a good reason that field hockey has always had a better safety record than other team sports.  Respect and reason were designed into the sport.  Part of the reason field hockey players wear so little padding is because of mutual respect. If one is vulnerable, one knows better than to tackle from the blind side.  It is the reason there are rules about dangerous play.  It is the reason everyone plays with the stick held at the top by the left hand. It is the reason behind using the flat side of the stick.

As stated recently in a Yahoo feature about dangerous sports, field hockey didn't even get on the radar. Football, softball, cheer leading,  lacrosse, soccer, and ice hockey had higher casualties; in numbers and in ratio to participants. CLICK FOR FULL ARTICLE. The study was taken before high schools were manipulated into mandating goggles. In the USA the wearing of goggles was required by the organization that dictates high school sports.  Those who manufacture and sell the goggles would like to increase their business. The perception that goggles make one safer helps widen their market.

Umpire and field hockey organizer, Cris Maloney, observed that younger children are being targeted for goggle sales. "I was sickened the other day," Maloney said, "when I saw a pair of little, tiny goggles at a sporting goods store labeled for field hockey. I am also sickened when I see youth programs and middle schools requiring them. Not only because the kids are wearing something so counter intuitive to developing field hockey skills but because the camp owners and middle school athletic directors probably think they're doing the right thing.

The thing is, when a kid gets hurt because of the goggles, their parents will realize that the goggle requirement was specifically designed for high school age athletes playing in games strictly governed by NFHS rules being enforced by two certified umpires---not camp activities, not middle school games. Those things are completely outside the scope of concerns considered by the NFHS. Lawyers are going to have a field day when a little boy or girl gets hurt in a middle school game or at a camp that required the kids to wear goggles."

Those who know the sport, understand that the wearing of goggles, rather than decreasing risk of injury, increases danger.   This is why USA Field Hockey prohibits the wearing of goggles at all its sanctioned events.  Some other  groups have bucked the trend and prohibited the wearing of the goggles.  Last year at  least one school required goggles at their camps.This year they don't.  Below is the statement directly from the website of the Ocean Atlantic Field Hockey Association ( http://www.oafha.org ) :

Avoiding the Dangers of Wearing Goggles

Posted by Sandy Kinnee at 6:26 AM No comments:

The Magic of Striving to Reach Your Goal 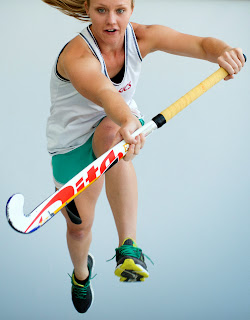 There are those who are content to be carried downstream, like a styrofoam cooler or oar that has fallen overboard into the river, swept away.  The water carries them where the water flows.

Then there are those who choose to strive for the goal they wish to reach.  I think they are called field hockey players.

Play GENIUS Level Hockey
We chase the ball, to reach the goal of our choice.
Posted by Sandy Kinnee at 7:43 AM 1 comment:

The Black & Blues of Field Hockey and Frozen Peas 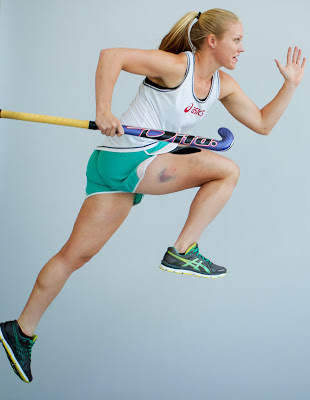 Stephanie Fee is not showing off her bruise on purpose.  Bruises happen.

Bruises are injuries that repair themselves.
A little ice and elevating the area so blood flows easily to the injury helps speed the healing process.Treating the area with cold helps during the first day.

I keep three bags of peas  in the freezer. The first two are used to offer TLC to the black and blue contusion. The third bag is for dinner.

Posted by Sandy Kinnee at 6:23 AM No comments: